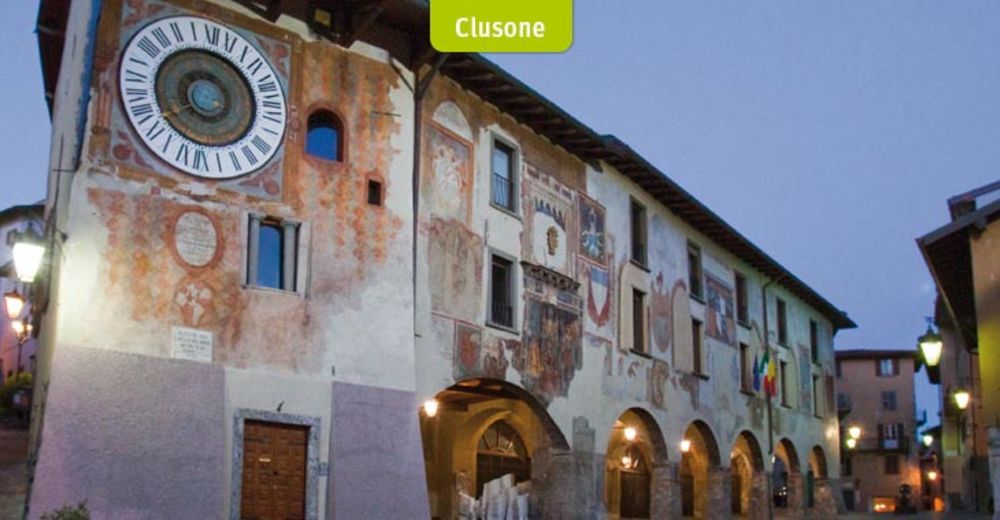 Alto Serio e Asta
The mountainous heart of the valleys, the kingdom of the imposing Serio waterfall, the highest Bergamascan peaks, the beautiful Val Sanguigno and Valzuro, of parks, verdant green meadows, refuges, snow-covered countryside, excursion itineraries and protected wildlife. And as well as all of that, the upper valley is also the realm of culture and sport: Gromo, with its medieval village, the picturesque Ardesio, the two ski areas of Spiazzi di Gromo and Lizzola. All the right ingredients to enable you to enjoy a marvellous holiday.

Clusone Presolana
On a sunny and substantial high plain and a historic destination for holidaymakers, Clusone is frequented by tourists in both summer and winter. This is the area of the capital of the Clusone valley, a noble and artistic town with its Danza Macabra and Piazza dell’Orlogio (Clock Square,) of the celebrated Castione and the Dolomite-like Mount Presolana. The ski areas of Pora and Donico are much visited by tourists, as are the beautiful centres of the Gera such as Rovetta, hometown of the Fantonis. Here, one finds the pleasantness of flat terrain and naturalist routes, where local vivacity and gastronomy find protection from the splendid surrounding mountains… And beyond all of this is the upper valley, with culture and sport: for example there is Gromo, with its medieval village, the picturesque Ardesio, the two ski areas of Spiazzi di Gromo and Lizzola. Here are all the ingredients for a marvellous holiday!

Dossana - Val del Riso
To paraphrase J. R. R. Tolkien, the beautiful land in the middle between the high and low valley …A well-organised territory, the cradle of Seriana civilisation. Here, we find the archaeological digs in Parre, the mines of Gorno and the eco-museum. And it is a historic land of hammers and economic traditions, of sanctuaries like that of Ponte Nossa and Oneta, and the gentle slopes of the river banks. To the splendid natural terrace of Parre echoes the mysterious Val del Riso, an area to be discovered and which leads to the Val Brembana.

Honio - Medio Serio
The mid-valley offers visitors really extraordinary nature views … They include the fairytale Val Vertova waterfalls, the Valle Rossa woods, the Terra di Bondo and the peaks above Gazzaniga and Mount Bue. It is all simply spectacular.

Cinque Terre della Val Gandino
A proud land with its own identity and history, this area is the homeland of the masters of wool and textiles, as well as a valley of gold and maize. Those are the Cinque Terre, with the superb Gandino, the admirable village centre including the Basilica di Santa Maria Assunta, the Palazzo Giovanelli and the historic museum and the wonderful Casnigo, which founded the ancient art of the SS. Trinità (Sistine Chapel of the valleys) with the freedom of a social theatre and the modernity of the agricultural industry. Then there is Cazzano S. Andrea with its medieval towers, the natural ‘balcony’ of Peia and the hard-working vivaciousness of Leffe. For those who love nature, there are Mounts Farno and Croce, with their walks and cross country ski runs … Cinque Terre for a unique, great Val Gandino.

Basso Serio
Located at the border with the city of Bergamo, Basso Serio is the most heavily populated and industrialised area in the valley. It is also the entrance to the Seriana treasure trove and the place in which the valley rises to its cultural heights. What is there to say about Alzano Lombardo with its grandiose basilica, numerous museums (ALT and sacristies) and industrial archaeology? Simply marvellous, that’s what. But let’s not forget Nembro with its 13th century San Nicola and the Zuccarello, the economic headquarters of the Albino valley, packed with monuments and homeland of the celebrated painter G.B. Maroni, Pradalunga cradle of the whetstone and, lastly, the fascinating churches of Villa di Serio and Ranica. And the backdrop for all of this is the Parco del Serio, its gentle hills and an extraordinary collection of events and festivals.

Altopiano di Selvino - Aviatico
At an altitude of 1,000 metres in the heart of the Orobic Prealps is the Altipiano (High plain) of Selvino and Aviatico. Its fame comes from its marvellous natural mountain scenery, its walks, its tradition of hospitality, the efficiency of its services and from its modern sporting structure, as does the offer of events and celebrations that stud every period of the year, always able to fulfil the desires of those looking for a 360° holiday or a weekend of unique good taste. At just 20 kilometres from Bergamo and 60 from Milan, the Altipiano is easily accessible to its visitors. It also has transport connections with which to travel to the lower valley; in just eight minutes with the extraordinary views from its cable car: that is the way to begin a holiday with style.
Unforgettable holidays. That is the promise the Altipiano always maintains and is famous for its events and initiatives of great quality. Culture, music, sport, shows, entertainment and great guests: there’s something for everyone and for all age groups in this lush and infinite scene of beauty.

Val di Scalve
Colere is in the Val di Scalve, but its history of tourism is linked to ours. It is an area protected by the imposing north wall of Mount Presolana, offers visitors refuges, trails, alpine huts, mountain pastures and the highest ski runs of the Bergamasca, culminating at 2,200 metres. All of this while maintaining the characteristics of an ancient mountain village. To live in.