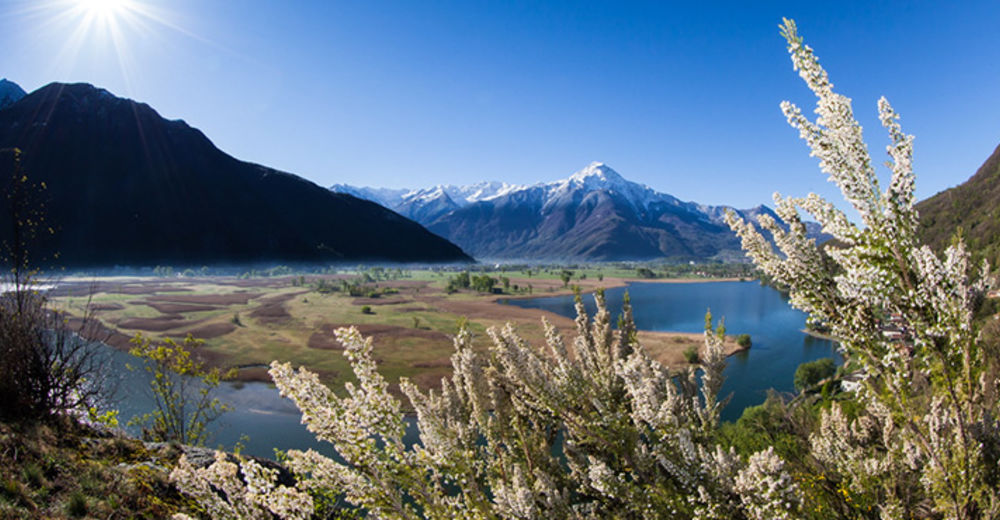 The Valtellina lies in the north of Lombardy, on the border between Italy and the Swiss canton of Grisons. It is characterized mainly by its vast river valley of the Adda which flows at the level of Tirano from the east to the west into the Lake Como. The Valtellina is around 120 km wide and 65 km long.

Two main valleys with its rivers dominate the landscape of the region. The Adda - originating in Bormio - flows through the upper Valtellina to Lake Como. And the rivers Mera and Liro - which flow into each other at Valchiavenna - coming from Splügen and the Bergell to Lake Mezzola.

With the Piz Bernina - simultaneously the highest peak in the eastern Alps - the peaks in Valtellina reach the 4,000 m mark and join the next northeastern peaks of the Ortler as the Ortler, the Cevedale, the Gran Zebru and the Adamello Presanella group. The Rhaetian Alps surround the north of the region, some wide valleys, including Val Masino and Valmalenco, in addition to the large area of Bormio and Livigno. South of the Adda valley, the Bergamo Alps rise with their narrow and wild valleys.

The east-west orientation makes the Valtellina region particularly suitable for viticulture. On the sheltered and south-facing slope side were over the centuries more than 2,500 kilometers of walls - as a basis for the vineyard terraces and the world famous Valtellina wines - were built.

The Stelvio pass with its 2,758 meters is the highest mountain pass in Italy and the second highest in Europe. The pass is the door to South Tyrol, and its name is also associated with the legendary cycling race Giro d'Italia. Just a little lower the Gavia pass with 2,621 meters is the connection to the Val Camonica.