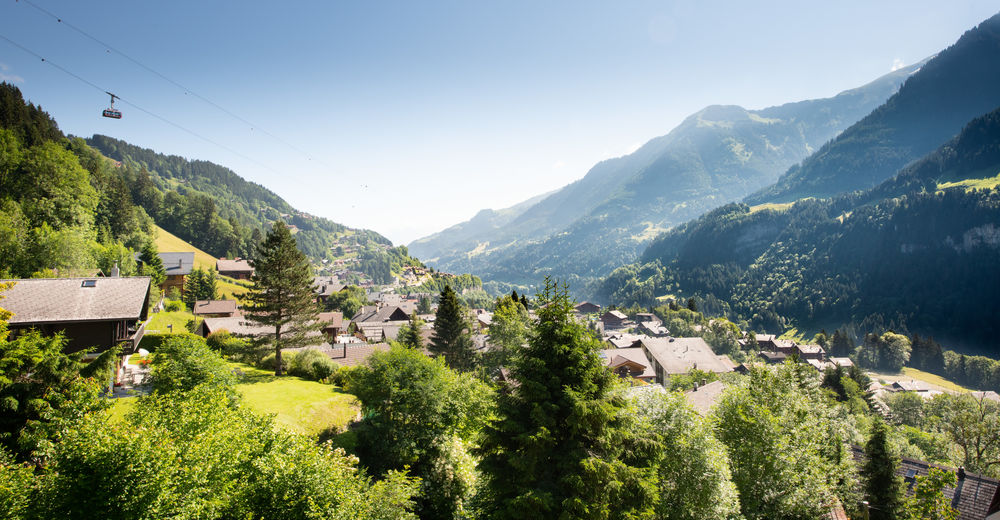 Nestled at the base of the Dents du Midi and the Dents Blanches, at the end of the Vallée d’Illiez, sits the idyllic village of Champéry. This typical Swiss mountain village in the heart of the immense French-Swiss recreational area called Les Portes du Soleil is the perfect base camp from which to explore the surrounding regions. Here, sports enthusiasts enjoy an endless range of activities, while leisure-seekers can just rest and soak up the cosy atmosphere.

For more than 150 years, Champéry has been one of the foremost tourist destinations in Switzerland, charming visitors from all over the world. Everything started with the opening of the luxurious Hotel Dent-du-Midi in 1857. In 1969, Champéry became one of the founding villages of Portes du Soleil. To this day, the Champerolains’ enterprising spirit endures and is evidenced by our continued efforts to renew and develop village infrastructures.

From the moment the first frosting of snow dusts the peaks of the Dents du Midi, a thrill of excitement shivers through the Val d’Illiez in anticipation of the coming winter season. With more than 286 pistes covering 600 km of terrain, it’s not hard to understand our collective obsession with winter sports. Skiers and snowboarders can choose from long, winding ski slopes, like the bucolic Ripaille – Grand Paradis run, or the Didier Defago run, named for our local Olympic champion, or test their mettle on perilous black pistes like the infamous, vertiginous mogul field at the top of Chavanette, better known as the Swiss Wall.

In the Val d’Illiez, the joys of winter come in a multitude of experiences and the ski slopes are just the beginning. 150 km of snowshoe trails explore silent winter landscapes far from the madding crowds, not to mention cross-country skiing, ski touring, invigorating winter hikes, ice-climbing, curling and oh so much more!